As if I never left

It has only been two weeks since I got on my new bicycle in Tilburg to head south. First into Belgium, then France, England and Wales. Now I’ve arrived to Fishguard, my last stop before getting on the ferry to Ireland.

Only two weeks and I’ve seen and experienced so much and met so many people. How did I do that, putting two weeks of bike travel into one blog?

Let’s start at the beginning. On September 13 I woke up in Tilburg while the wind was blowing fiercely around the house. Rain came and went but it was mainly the strong winds that made it unpleasant to go out. Nonetheless I packed my new Ortliebs on the bike and put on my bike shorts hoping that would tempt the sun to come out and play. My mum and me got on our bikes, heads into the wind.

We reached the town square in Turnhout, our traditional place to say goodbyes, at 33km after almost 3 hours of riding. I had planned to visit the company that provided me with extensive new clothing by Sportful and deliver some cake and then carry on to a friend of mine in Mechelen to spend the evening and night. It re-appeared to me that bike travel and ambitious tight planning don’t go very well together, specially not when there are gusts of 75km/h predicted. I gave in and decided to hop on a train to cover a part of the route that day so I could still make the visits as planned.

Not a great way to start an ambitious bicycle trip.

That feeling disappeared quickly when I arrived at my friend’s house and we sat down on some comfy Indian pillows, still pretty tired from fighting the storm, sharing a great meal and getting beaten a game of chess. I refreshed my memory about how great a shower feels after an intense bikeride that leaves you cold and sweaty with your jacket sticking to your skin.

A wonderful way to start a beautiful bicycle trip. 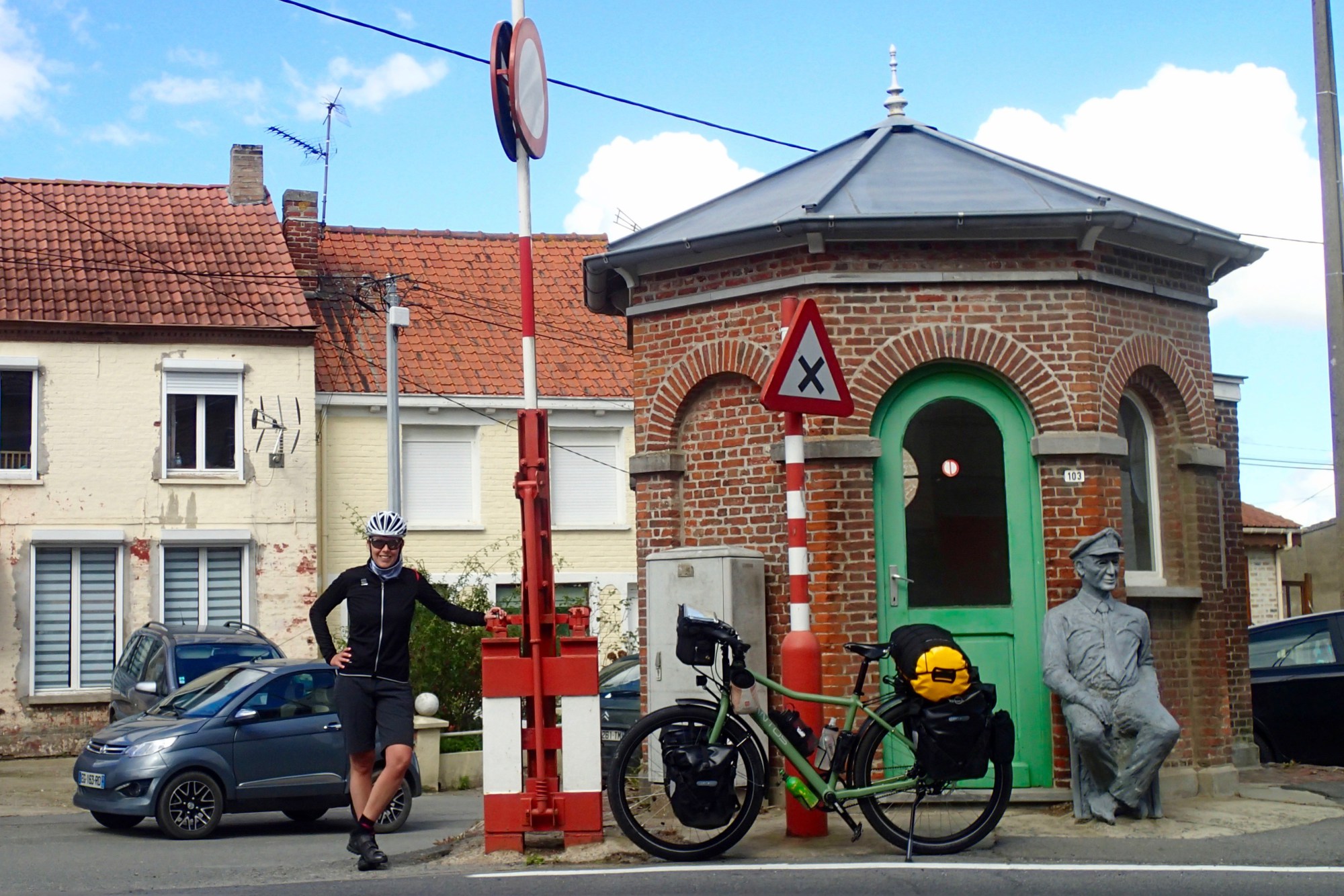 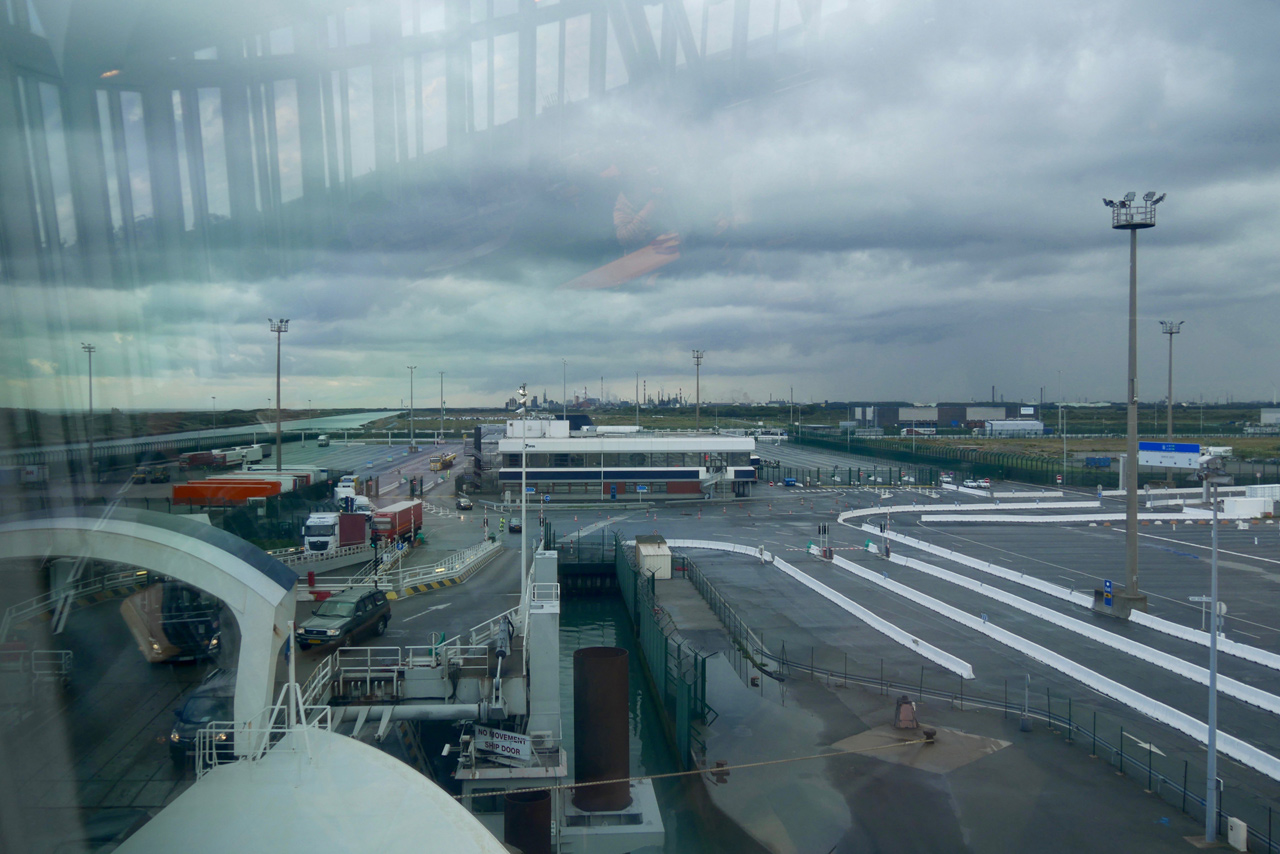 I got to Dunkerque within three days time and the next day I saw the white cliffs of Dover appear at the horizon. England! The vigorous winds had calmed and as I got off the boat in Dover I could start my riding in a t-shirt. That evening I ate a sober pasta without sauce, hoping that the routine of what goes where in my panniers and always having some food to cook would soon come back.

I cycled along the south coast of England enjoying the mainly dry weather and even bits of sunshine. Very different from what I had prepared to find myself in. Through Facebook I had received a few invitations from people who follow my trip and live in England. One of them was sort of on my way and I was happy to accept the invitation which resulted in a great meeting with a fellow bike fanatic and his family. 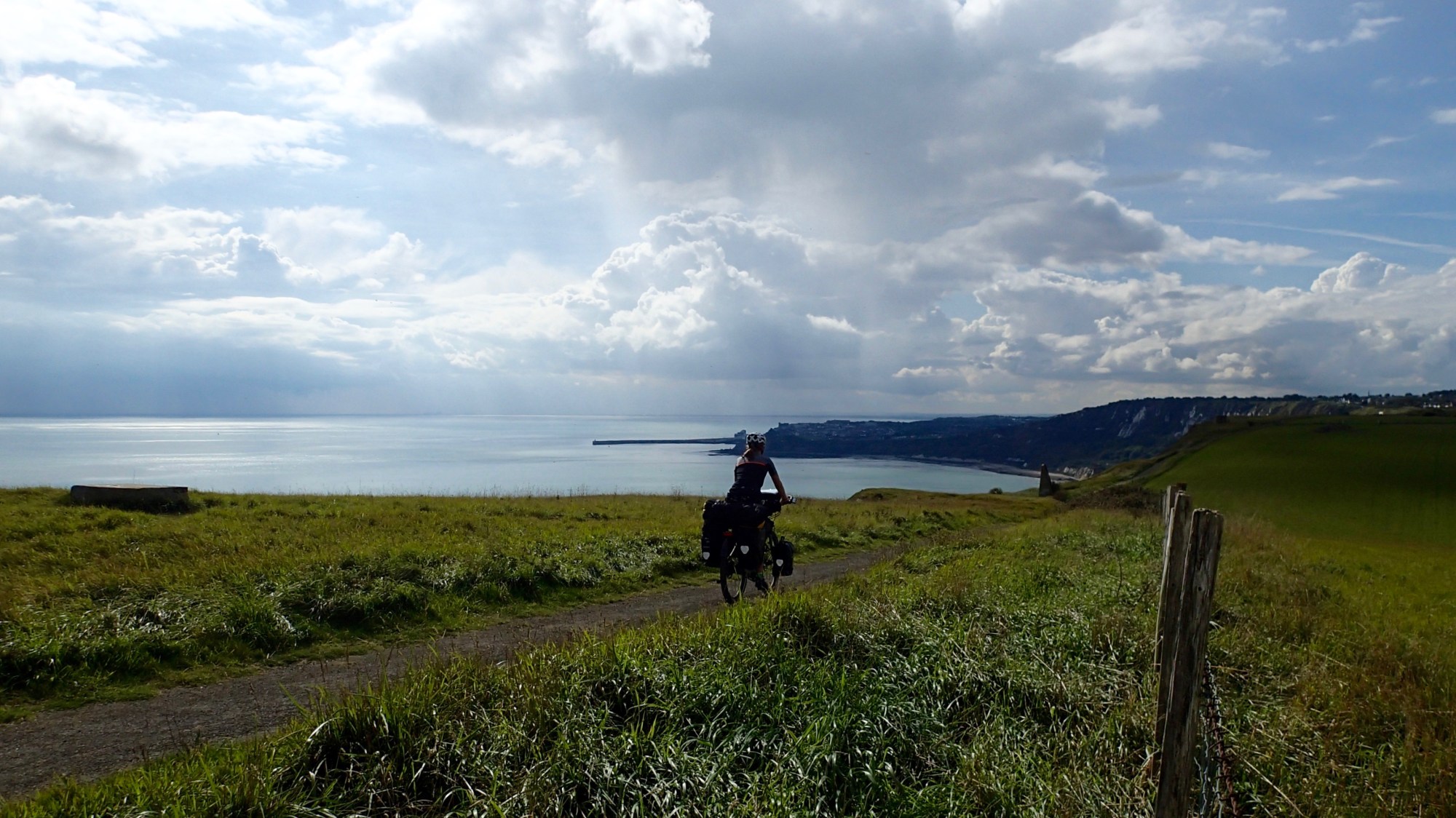 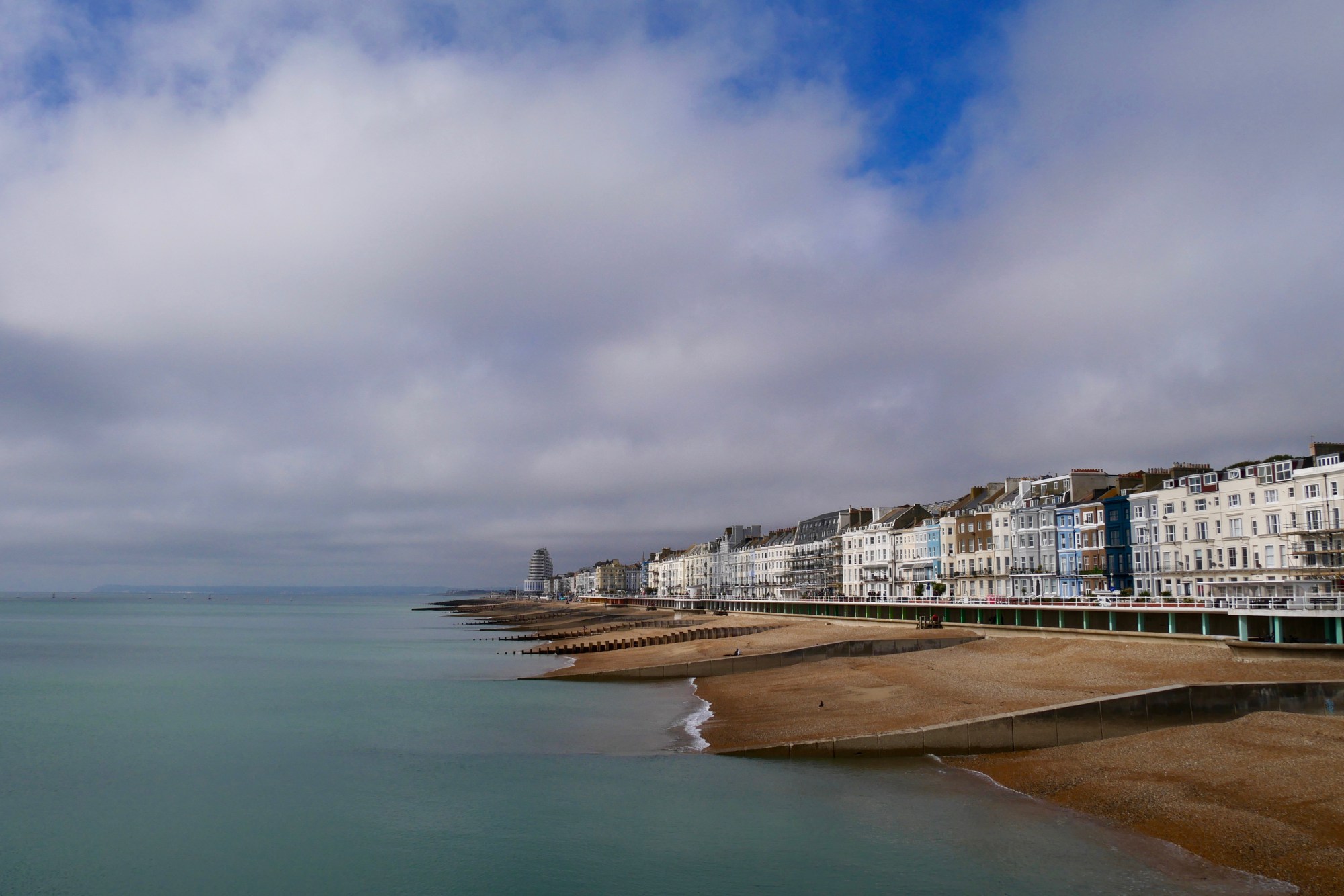 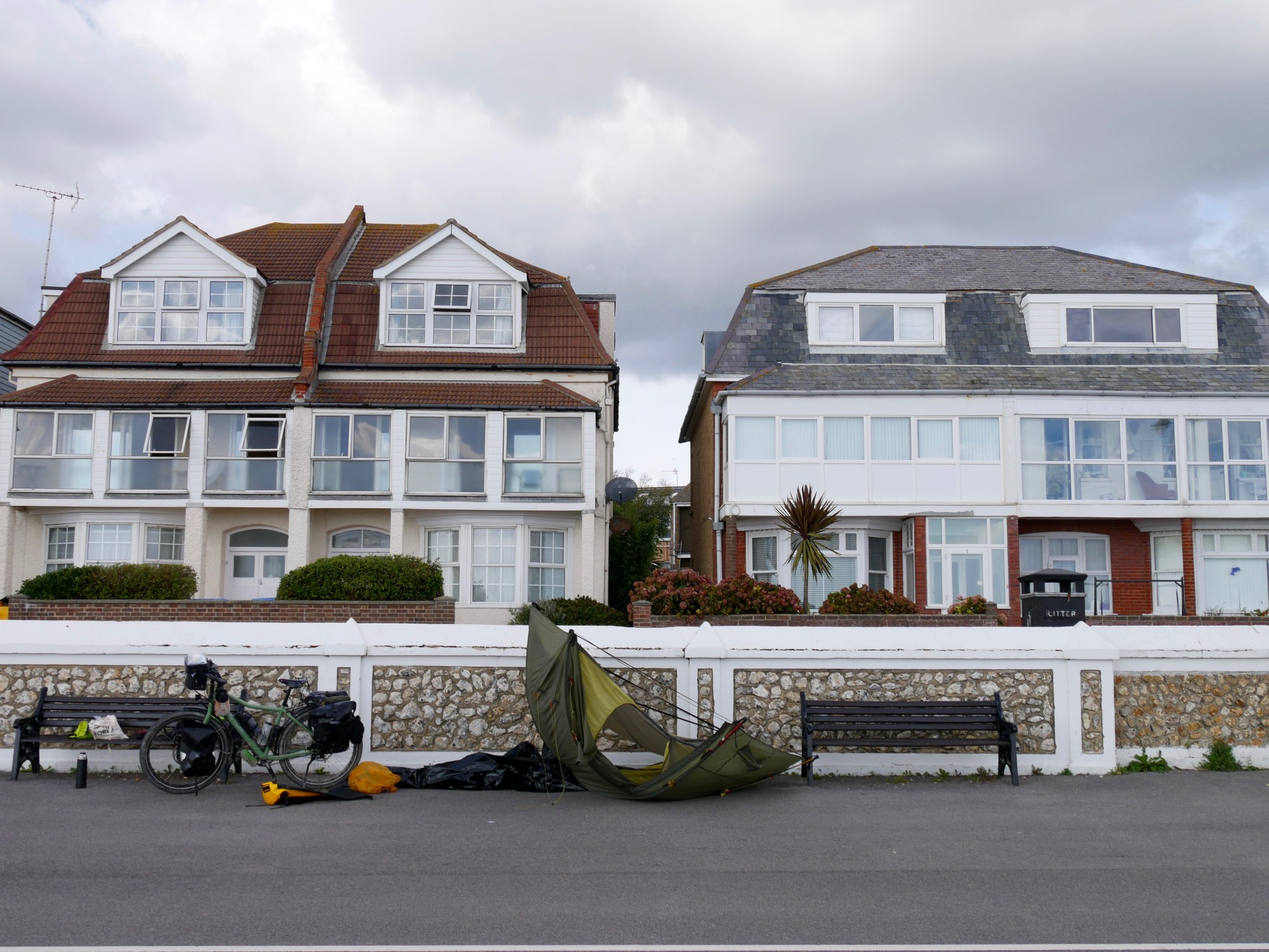 The next day I cycled to Portsmouth from where I took the ferry to the Isle of Wight, a 20 by 20km diamond shaped island with about 150.000 inhabitants. I was a guest with Mark who lives on an old boat in the harbour of Newport. In the evening I joined him for a Scottish dance class, where I lowered the average age by about 30 years. The passionate and undoubtedly talented teacher in kilt was struggling to keep his balance standing on one foot and I could hardly understand a word of his instructions but nonetheless he kept the pace in which we were expected to pick up the new routines very high. Halfway the evening I was the first to give up and sink down on a chair on the sideline, rapidly gratefully followed by some older ladies.

During my ‘rest’day we went around the island by bus and foot and I ate fresh fish & chips as the sea wind blew my hair in my face. 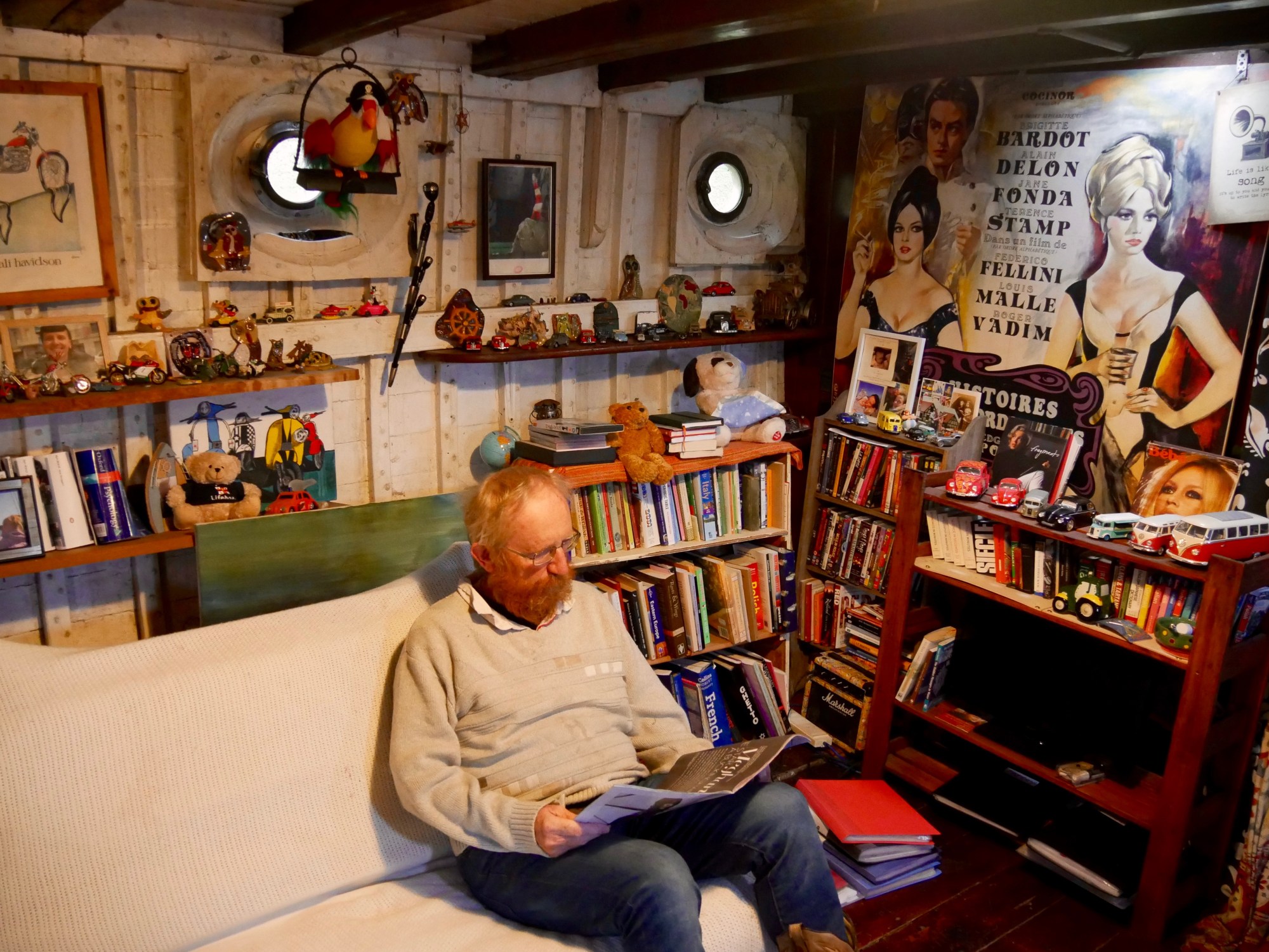 In the days that followed I cycled north towards Gloucester (pronounced Glòstuh, not Glouwchester, I was taught). England has a extensive cycling route network. I followed bits over different routes. The intensity of the routes, I was told, should be based on what a teenage girl with a average condition would be able to cycle comfortably. I’ve humped and bumped over rocks, pushed my bike through mud and up ascents of 20% and plowed through high grass. Sometimes guided by signs, sometimes relying on Google Maps. I got annoyed at times but I mostly enjoyed it thoroughly. I’ve only had to ride on main roads for some kilometers a few times. For the biggest part I was riding tracks and narrow quiet roads through fields and villages. 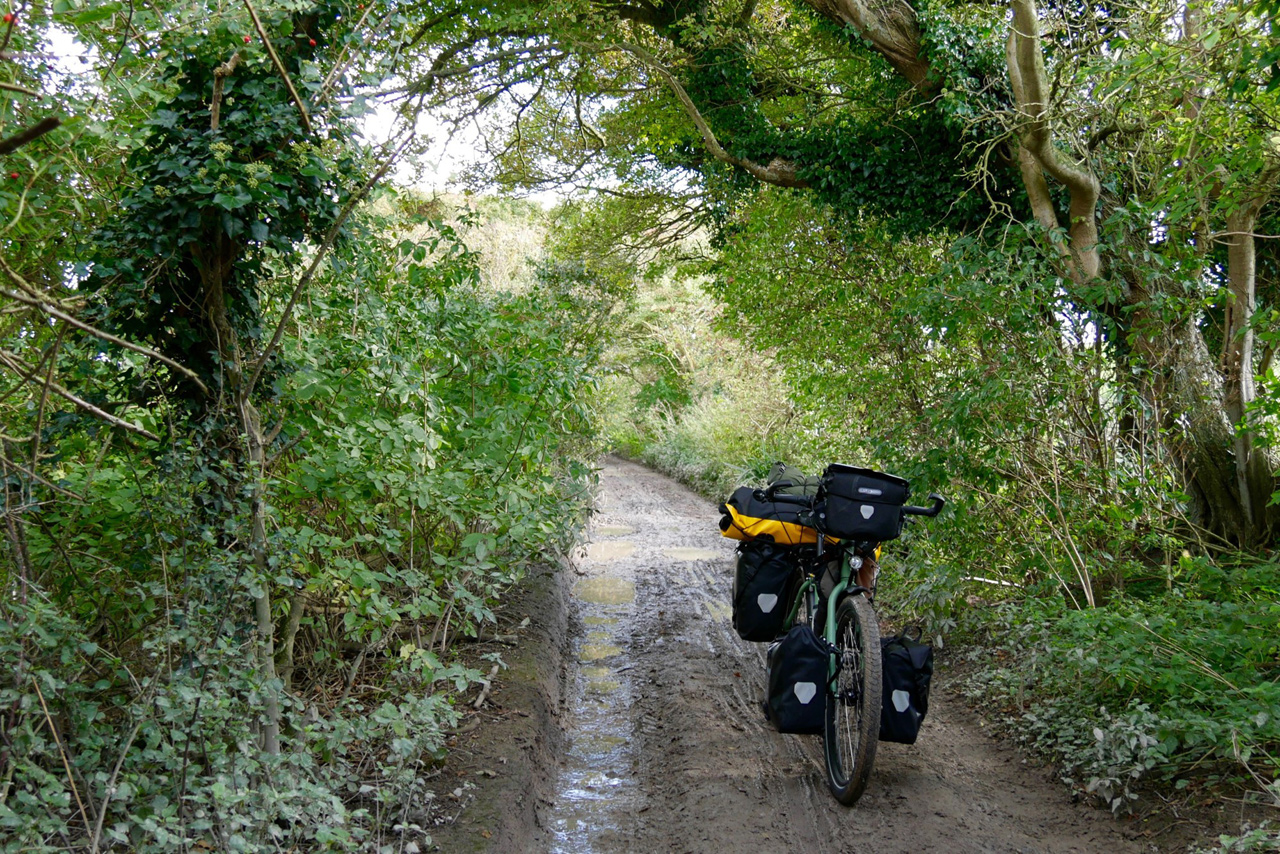 Before getting to Wales I had done quite a bit of climbing on the bike, but now the real work was about to start. I wanted to cross the National Park ‘Brecon Beacons‘. WarmShowers hosts had assured me that it would be easier to wild camp there. Still 95% of the time I was surrounded by farmland and therefor I ended up camping in fields after asking the farmer for permission. Interesting to see how their response differed from the responses I got in eastern Europe at the time, where I was always invited for a meal and sometimes even to sleep inside. Here they just wished me ‘a good evening’. Though just as I turned around the lady farmer told me: ‘Just pop over to the house if you need anything!’ 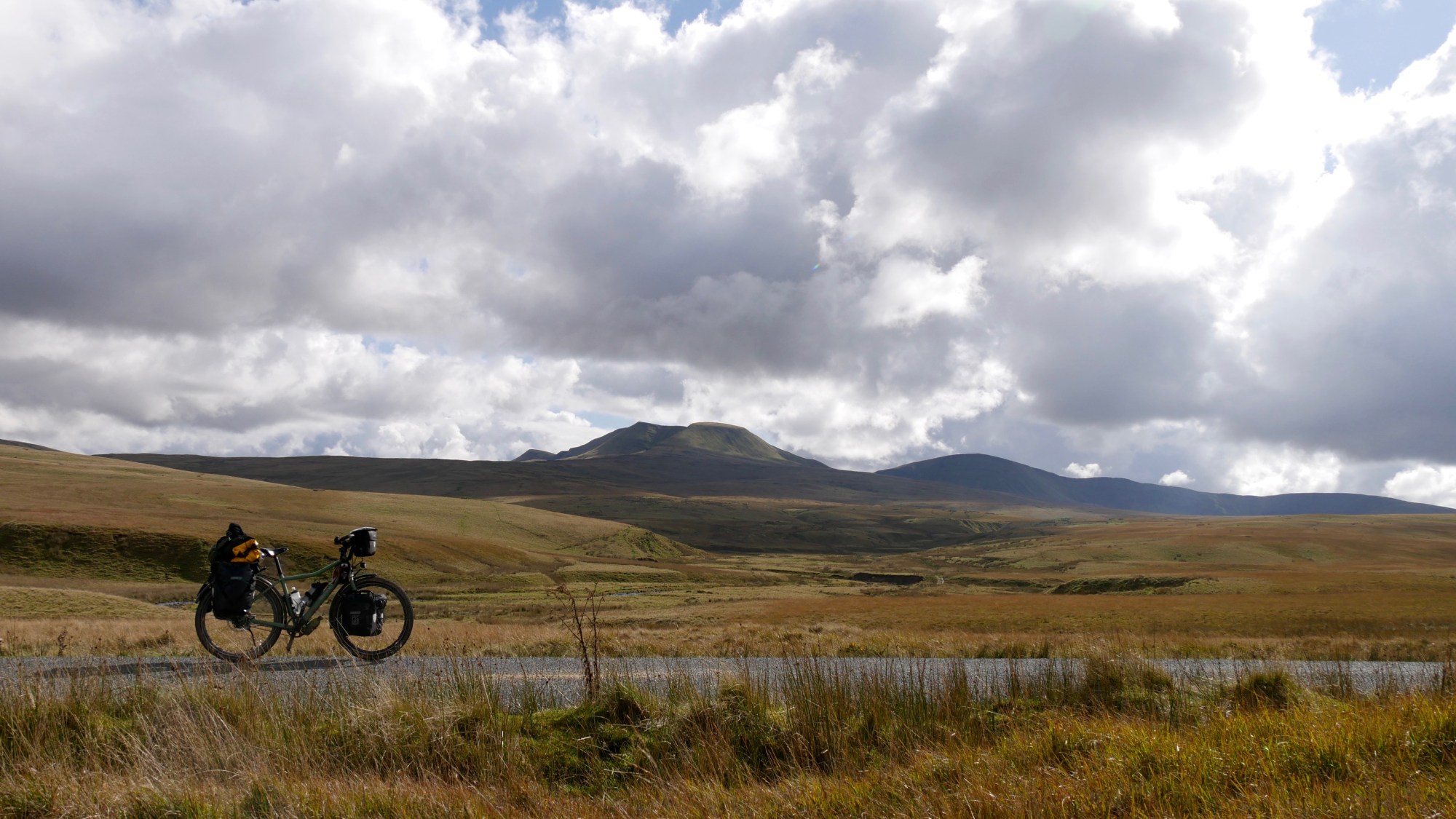 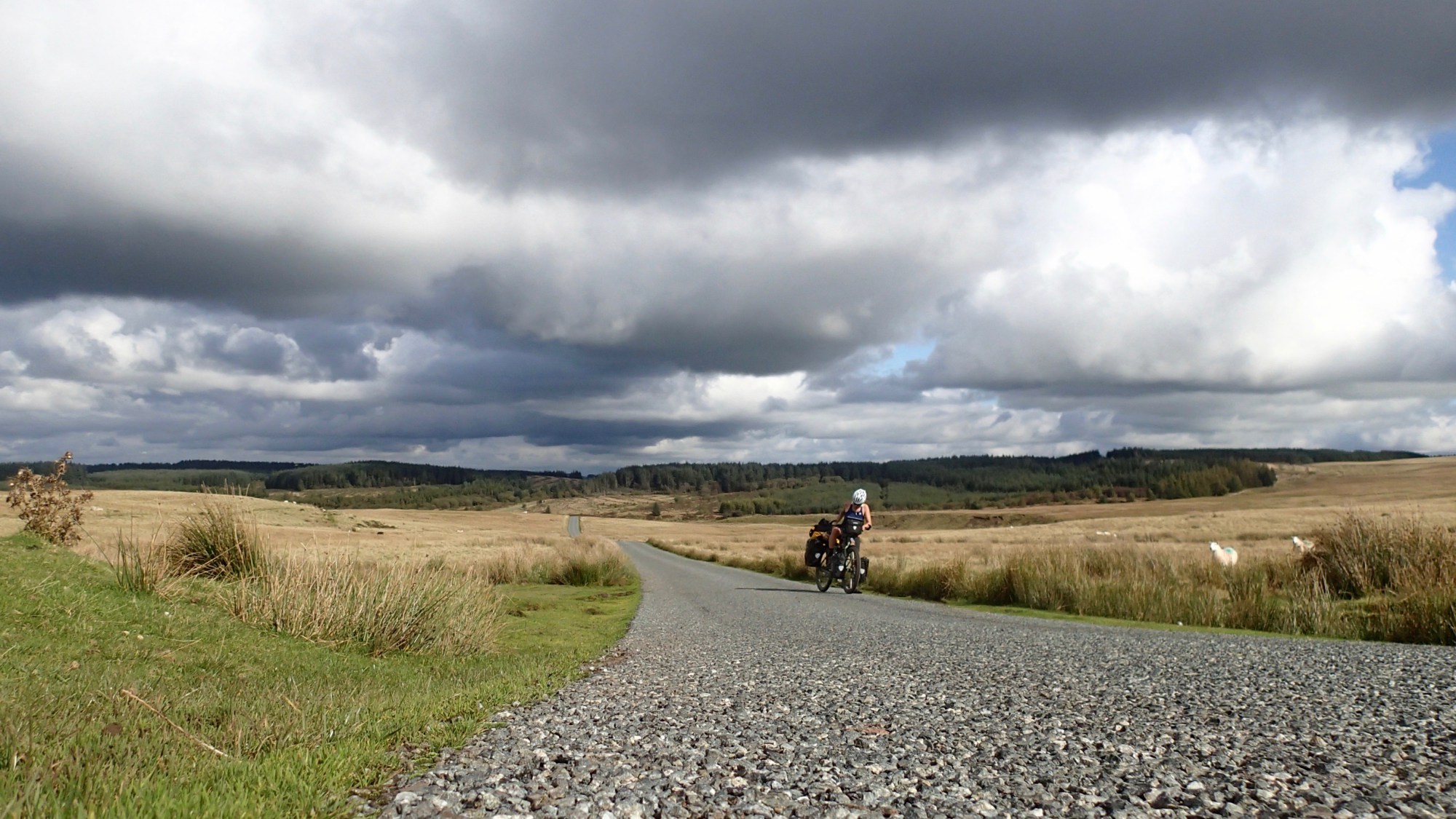 After an intense last day to Fishguard I accepted the invitation to come to a pub where live folk music would be played. Men and women sat in a circle with varying instruments, mainly strings, some flutes, accordions and harmonicas. They played and sang folksongs from Wales and Ireland, joining in with whoever started a tune. It was a great experience to get an insight into a community where people meet up to make music together every Tuesday night, some already for over 20 years. 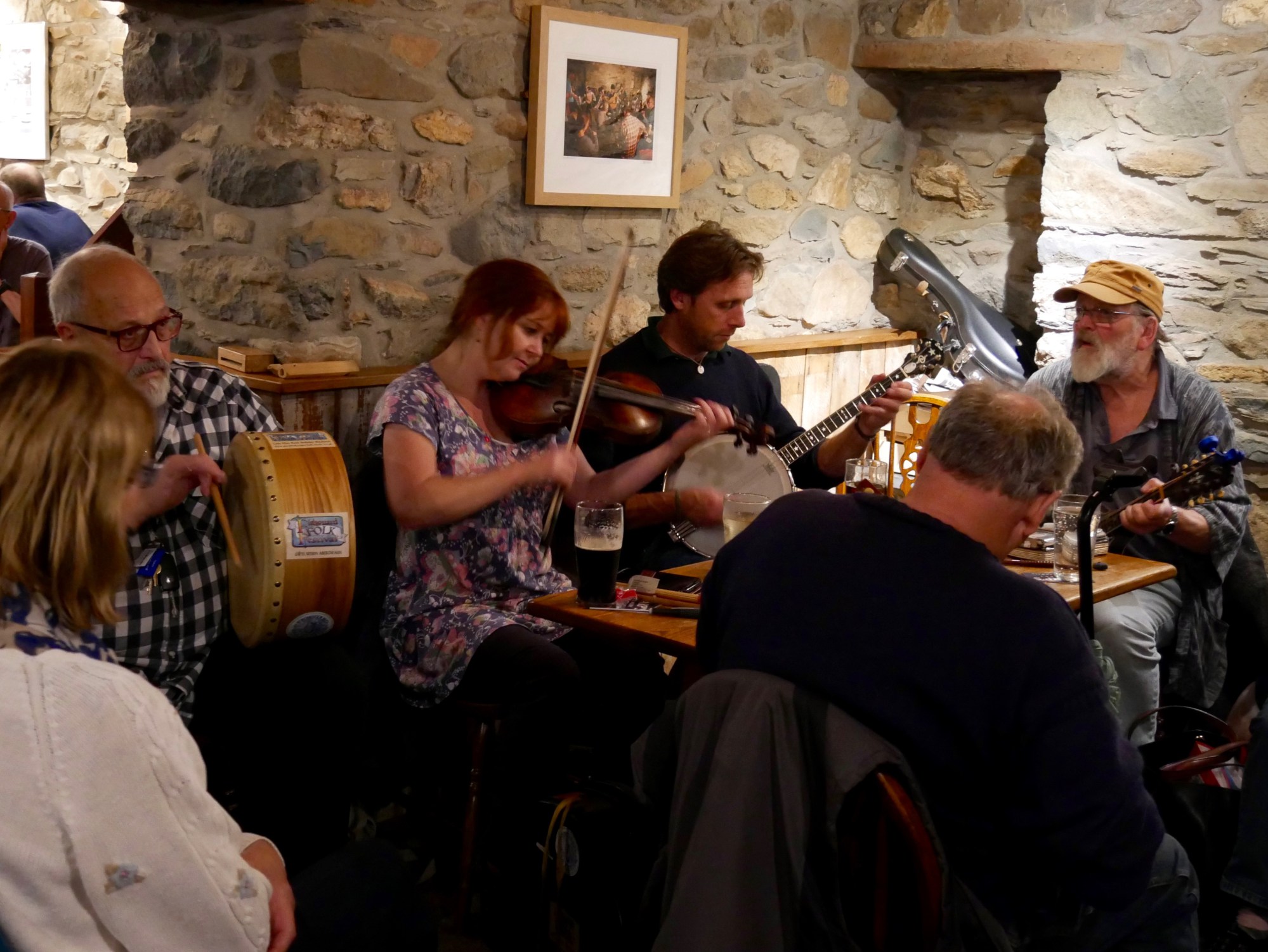 So, we’ve been on the road for two weeks now, my new bicycle and me. A monster, is what both I and some other cycling enthusiasts have called him. And he is! A good 35 kilos of bagage and me to carry, no problem, he’s still stable like a motorbike. Rocks and bumps, he rolls on smoothly. No ascent or descent is too steep, no road is too bad and now load too heavy… but he sometimes forgets who’s in the saddle, who’s his engine and has to keep him on track. A little woman that weights just about the same as him and his packs. So we’ve crashed twice now, nothing big, a lack of technique on my side, getting used to this stallion. He knows he’s handsome, strong and rugged, now I have to tame him and teach him to follow my lead.

Tomorrow we’re taking the ferry to Ireland. The winds blow fiercely and the rain drips down the windows. Autumn is here, undeniable. I’ll enjoy the comfort of a bed tonight, cause it seems there aren’t too many coming up in the weeks to come.

My journey has started again.
As I was listening to some podcasts and music yesterday, while riding, tears came to my eyes several times, and as I reached the top of yet another climb they rolled down my cheeks for a moment. The stories and lyrics touched me deeply. There is no place where I am as vulnerable and strong at the same time as on my bicycle.

After 2,5 months at home base I’m on my way again. It feels as if I never left. 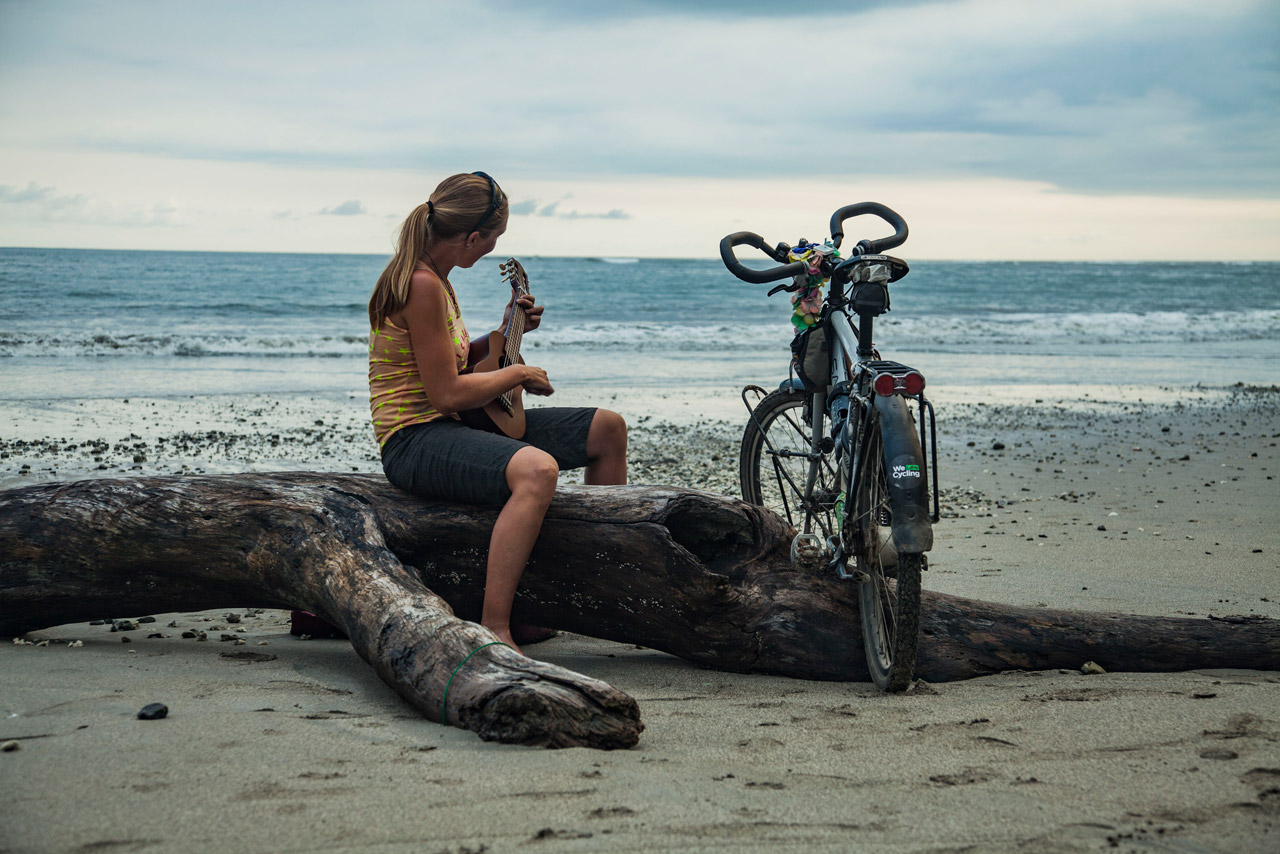