Meeting a friend in a desert landscape of bright white salt

A day before we arrived at the world's largest salt flat, Salar de Uyuni, we were invited to sleep at a Bolivian family's house. For the first time in several days, we had access to WiFi. It was slow, but we were able to send Jace, our friend we had cycled with in Argentina, a message with the coordinates of where to meet. Salar de Uyuni covers more than 10.000 square kilometres, so it's not exactly a place where you bump into each other. 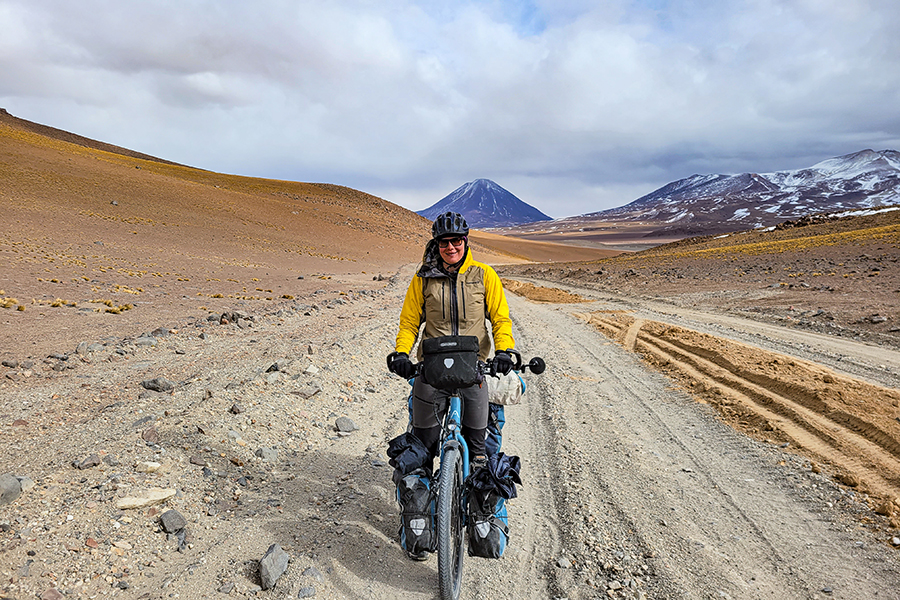 We had some tough cycling days to get to this point as we had chosen to cycle from San Pedro de Atacama in Chile and up the so-called Sur Lipez route, also known as the lagunas route. We knew it would be sandy and cold but we had hoped for less wind. 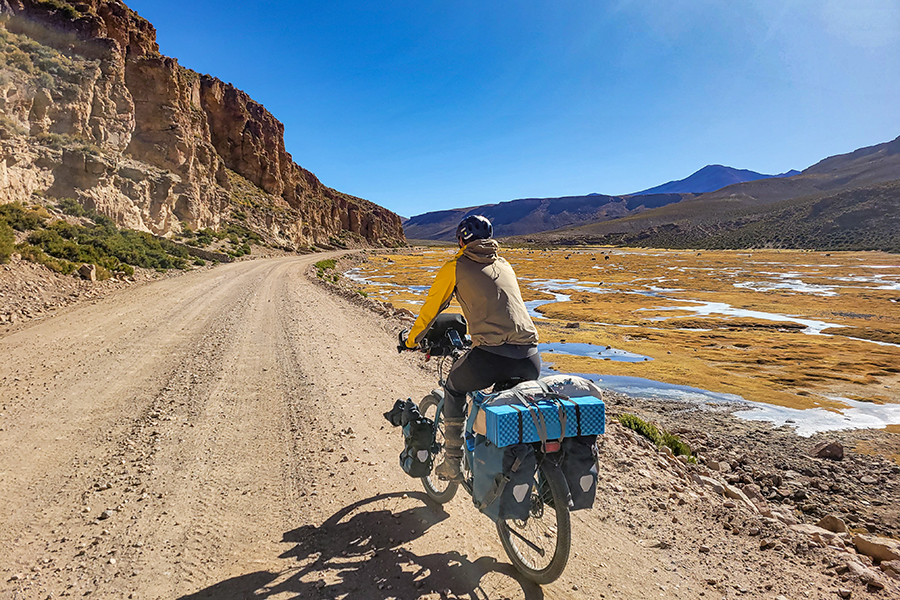 After 10 days we looked back and were happy we made it. Now there were only 2 days of cycling left to reach the coordinates we had sent to Jace. As we cycled away from the family we had stayed with in the small rural village of Julaca, we saw the salt flats on the horizon. We cycled all day along the salar and reached a salt hostel on time to relax and check out the place. It was a house made of salt and a place for tour groups to stay while traveling through remote southwest of Bolivia.

"We finally saw a dot in the distance

We woke up and made our breakfast in the cold room of the salt hostel before we set off across the salt flats. On the GPS we mapped out the coordinates and we had some 80km to cycle into what seemed like nowhere. A long lunch stop was needed as we were all alone and the sun was warm. So we rested there amid all the white salt and played around making some fun photos.

After riding for hours over the crunching salt under our tires, we finally saw a dot in the distance in the direction of where we would meet Jace. As we got closer probably 2km away we could see the shape of a tent and soon Jace got out and waved at us. 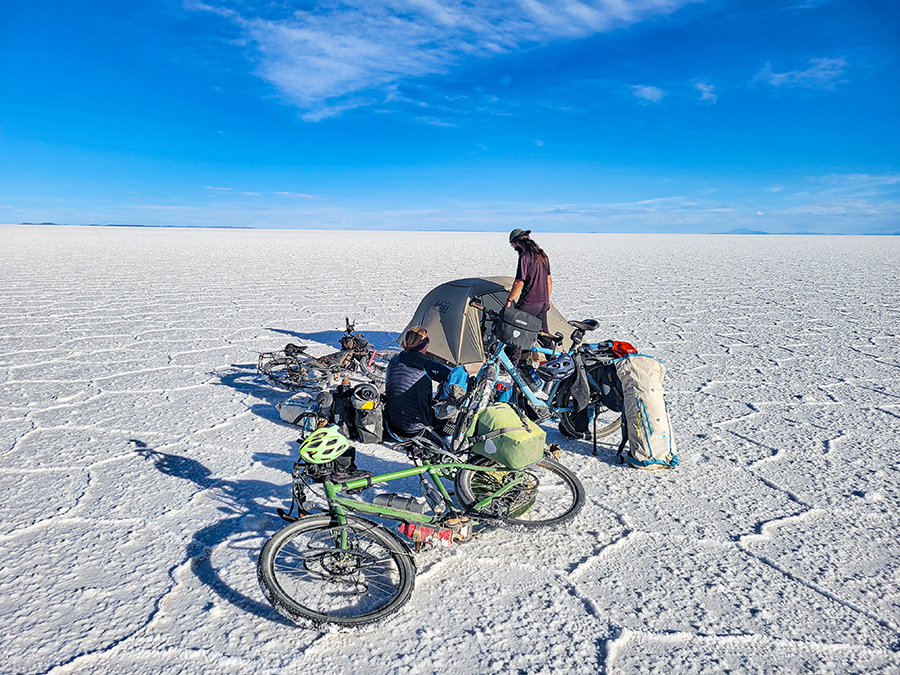 We sat down and told stories about our rides. Jace had ridden from San Pedro de Atacama up through some remote places in Chile before crossing Bolivia to Uyuni. So he had just been to town and brought beers for the occasion. 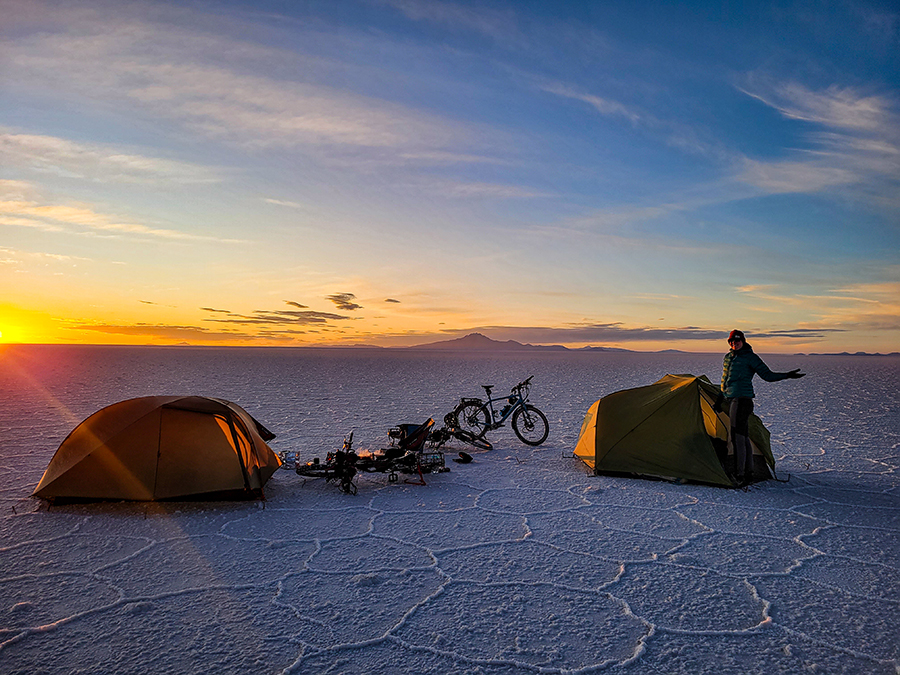 As the sun was going down we went into our tent to cook. We had been so lucky to buy half a kilo of minced lama meat from the family we stayed with. So a feast was made and we enjoyed the company on the magical white salt flats.

As we cycled away the next morning, we told each other that saying goodbye to a friend on the road is never a goodbye but a "see you down the road". 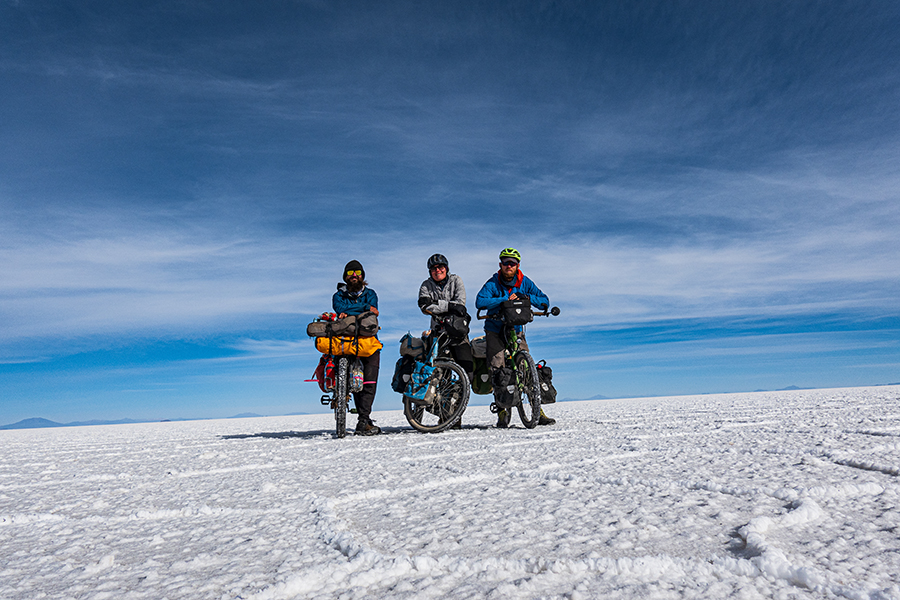 Come along on our trip 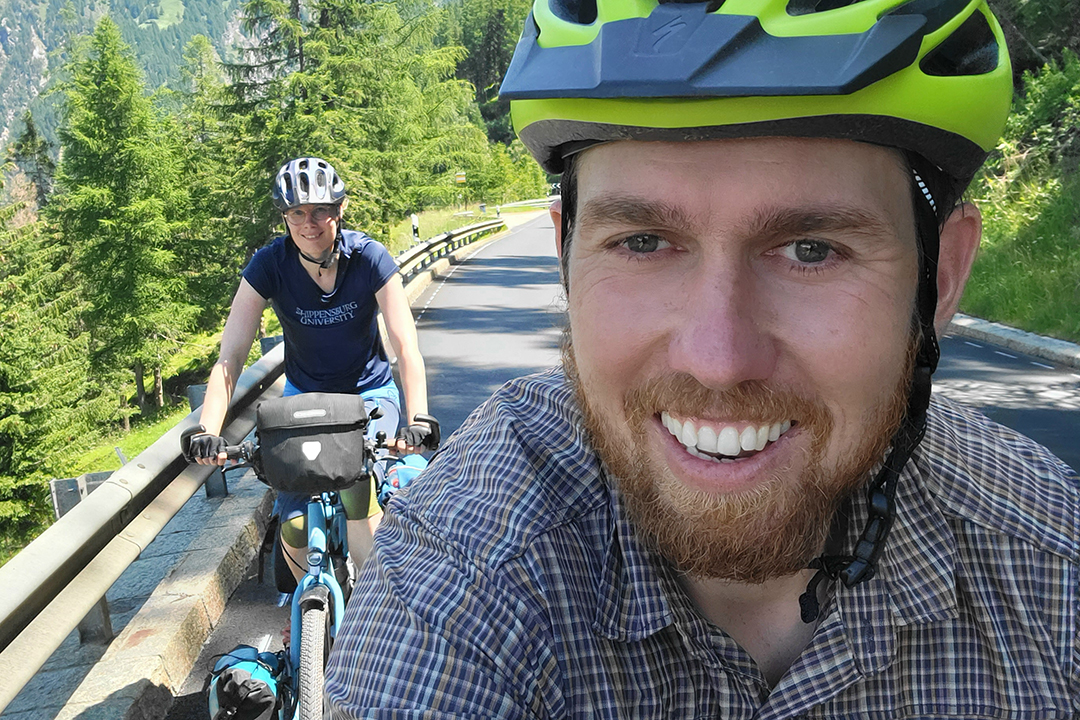 Martin (previously cycled from Rotterdam to Kathmandu) and Katja (cyclist since Summer 2021). Both from Denmark.